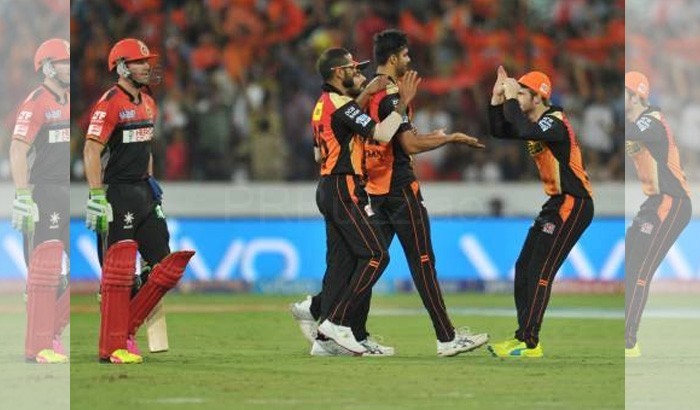 Sunrisers Hyderabad beat Royal Challengers Bangalore by 15 runs Sunrisers Hyderabad backed up David Warner's scintillating 50-ball 92 with a clinical bowling effort to grab a 15-run victory over Royal Challengers Bangalore Image Credit: AFP Sunrisers Hyderabad Published: 23:59 April 30, 2016 IANS Add to My Gulf NewsSHARERssShare on facebookShare on twitterAdd on google plusSend Email to FriendAddthis 0 Hyderabad: Sunrisers Hyderabad (SRH) backed up David Warner's scintillating 50-ball 92 with a clinical bowling effort to grab a 15-run victory over Royal Challengers Bangalore (RCB) in an Indian Premier League (IPL) encounter at the Rajiv Gandhi International stadium. Chasing Sunrisers' 194/5 during the match on Saturday, RCB only managed to post 179/6 with Lokesh Rahul top scoring with a 28-ball 51. AB De Villiers contributed with a 32-ball 47. Ashish Nehra, Mustafizur Rahman, Barinder Sran, Bhuvneshwar Kumar and Moises Henriques picked up one wicket each for the hosts. Royals Challengers had started off with a flyer with the inform Virat Kohli and Lokesh Rahul scoring 29 runs of the first three. But then Kohli (14) who scored a scintillating hundred in the last game fell trying to drive a Mustafizur Rahman delivery on the up. After six overs RCB were 45-1. Rahul kept the scoreboard ticking at a healthy pace smashing Barinder Sran for 13 in the 9th. He then completed his fifty but was out caught behind a little later. Shane Watson (2) too followed Rahul back to the dug out as he fell short of his crease trying to steal a single. De Villiers who was living a charmed life having being dropped twice then stepped on the gas. He started off by belting Moises Henriques for two consecutive sixes in the 14th over which yielded 19 runs and followed it up with a boundary of Sran. ABut the South African then failed to connect one and was easily caught in the deep by Kane Williamson. With De Villiers went RCB's hopes as well and though Sachin Baby (27) and Kedar Jadhav (not out 25) tried hard they fell short in the end. Earlier in the day, after being sent into bat the hosts rode on the sparkling Warner knock to get to a strong total. Kane Williamson, who was playing his first game of the tournament with his 38-ball 50 was the other major contributor for Hyderabad. They got off to a solid start courtesy of Warner's brave shots but Shikhar Dhawan (11) fell in the 4th over with the score reading 28-1. By the end of the powerplay, the Sunrisers had forced their way to 49-1. SRH did not look back after that as Williamson and Warner carried the innings forward with some brilliant stroke play. The duo kept tonking the RCB bowlers all around the ground which included a 19-run over off Kane Williamson. They put on a partnership of 124 runs after which Warner got out trying to clear long off. But the stage was stage for the batsmen coming in to throw their bats at everything and that is precisely what they did. Moses Henriques scored an unbeaten quick-fire 14-ball 31 to ensure the run-rate did not go down. Kane Williamson's wicket in the 17th over helped RCB pull things back a little as the hosts had to settle for a score less than 200. Brief Scores: Sunrisers Hyderabad 194/5 (David Warner 92, Kane Williamson 50; Kane Richardson 2-45) vs Royal Challengers Bangalore 179/6 A(Lokesh Rahul 51, AB De Villiers 47; Ashish Nehra 1-32) 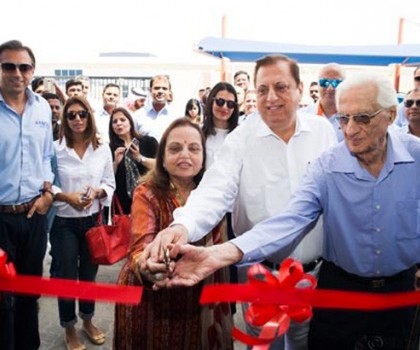